Ah, check out this lovely piece about Odetta, catch her discussion of “theft” where she schools her interviewer on inappropriate application of property arguments to musicking in the tradition she is a part of.

Seriously. Watch it first, it’s a lovely 20 minutes, and then I will take you through her amazing smackdown of her interviewer.

At 13:48, he asks her about Dylan, about how he “took something deep from” her. She pushes back, says he was “influenced” by her, but that he did his own thing with it.

He than says that Dylan listened to the same songs as her, recordings of sharecroppers, workers and slaves, and “stole” from them. She says, immediately, (at 14:15) “no no no no no”

“We call it folk music we don’t call it stealing.” And this look, while she says it.

And then as she is trying to choose the right word (“what do we call it?” she asks herself, clearly), the interviewer offers “Appropriation?”

And Odetta says: “well we could but we don’t” and looks back again at him for emphasis.

Odetta will have none of this property language, even though her discussion of the music is rooted in a sense of ownership in a way, ownership of her self and her experiences and her perspectives.  First, she roots what Dylan did in a social practice, She says we call it “passing on the folk tradition.”

In it, I hear a lot of things going on. But starting with the fact that she begins by looking him in the eye while she laughs:

She’s tossing back at him words used by music-writers, scholars, ethnomusicologists–people who also, for the most part, are implicated in different but maybe equally hierarchical institutions.

But the laugh continues. There’s more in there, I think. The most obvious, is the one maybe hinted at in the interviewer’s “theft” language used by : focusing on the different people involved in the tradition. Dylan, a white guy, and black sharecroppers in the south.

And she keeps laughing. 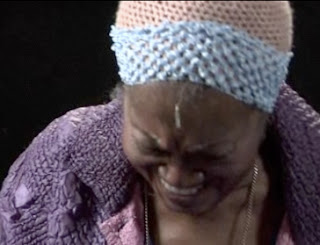 She is not only adamant that theft is not really the right word, she earlier describes the folk scene, the “bohemians” as a home for her, and I don’t think that scene was all black sharecroppers. But there’s a lot in that long, long laugh. I wonder if there’s something broader than the story of Dylan and his relationship to the music personally.  Because she talks about tradition, she shows how aware she is of social institutions bigger than individuals. Maybe that laugh has in it the rueful acknowledgment of how Dylan was able to make something of that folk tradition that catapulted him into a kind of fame not reachable by the people with whom he was in creative dialogue, not because of his talent, but because of his position – although an outsider, he’s not as much of an outsider as sharecroppers in the south. Even through genuine participation in the tradition, he ends up with something quite different, because he has access to institutional power by virtue of things that are partly beyond his or anyone’s control.

But, ironically, given the whole piece is about her, the interviewer doesn’t seem to be really listening to Odetta and the points she make. Even when she fixes him with a lazer-like look,

How can he miss that look? How much more explicit can she be, that the language you apply to musicking matters, that words like “stealing” do violence to the social realities of music?

But he can’t let go of the morally-inflected language, keeps harping on the word “steal.” So then she changes tactics and says  “we professionals have stolen an awful lot from amateurs!” 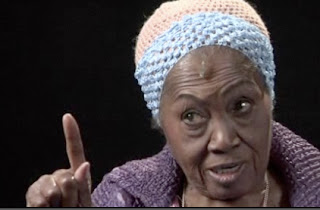 Undercutting and complicating his simplistic approach. She said those guys making those songs didn’t get paid for them .. “but us professional people got at’em, and learned from’em…”

SO AMAZING. She implicates herself in this system of power – she doesn’t claim ownership as a bohemian, a folkie or a black person. Instead she recognizes her specific status, someone who gets paid within a larger system. Not in a guilty way, but not in denial about the realities of music-making, even alongside the potential for communication, mobilization and healing. 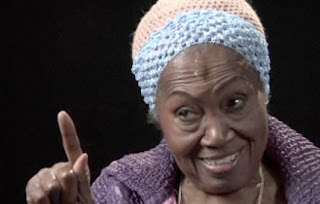 Marking A Win for Free Expression Online, Copyright Office Finds that New Forms of Copyright Would Not Benefit Journalism